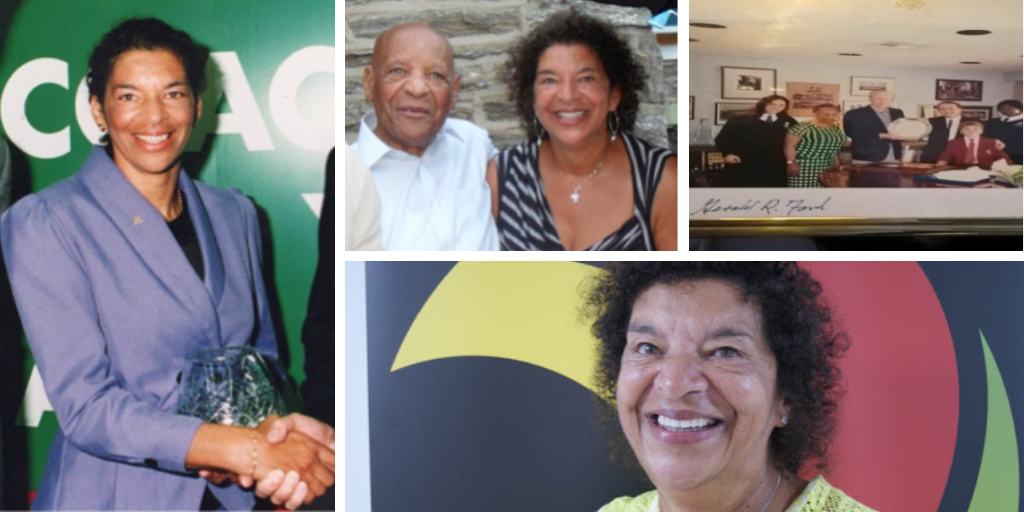 This month, Wales Netball has been hearing from prominent Black members of the Wales Netball community on the theme of inspiration as part of Black History Month. Here, Wales Netball President, Merle Hamilton shares her story, talking about love, loss and discovery…

“As President of Wales Netball and after listening to the contributors to Black history month for Wales Netball, I realise that those of us of black and mixed race do have ​an important story to tell.

“I was asked if there were any Black people who had inspired me during my life and I could not think of any. However, I could think of many that I admired, mainly from my teens onwards and mainly in the sporting world as well as music. For a reason, unknown to me at the time, I was always sport mad and was admired those athletes who achieved gold medals in Olympics and who played at the top of their game in football and other sports.

“I came from a mixed family background: my mum was from Cheshire and my father came from Jamaica towards the end of the second world war with the Royal Air Force.  They married and had three children but unfortunately, after eight years together, their marriage broke down and my father went to live in London and eventually the family lost contact with him. I was brought up in a small village in North Wales with my mother’s family. I saw very few black people with the exception of some of my mum’s friends who did not live locally.

“After my mum passed away in 2007, my sister and I decided to look for our Jamaican roots. After lots of searching for birth certificates through the Mormon church and an advertisement on the ‘Missing Persons’ website on the internet, there came a breakthrough. There were nine people with my father’s name living in London. Not getting our hopes up too high, I wrote 9 letters to each one outlining the details of the family that we knew we belonged to.

“Then it happened. I had included my telephone number on the letter, and one Sunday morning – rushing out to netball, of course – came the call. My dad telephoned me – I was in total shock and I cried all day.

“And so, my relationship with by Black family began and I have never looked back. I have been to Philadelphia, New York and met aunties and uncles, cousins and extended family. Importantly, I have been to Jamaica to dad’s family home in Bamboo where they were all brought up and where my grandmother is buried.

“My dad’s sister Eva Davidson, MBE, is now my last living aunt, and she received an award for the work that she did for the Black community in London. I admire her so much for all her achievements in life and hope that I am not unsimilar to her.

“My journey with Wales Netball began in 1984, as a selector, U16 & U17 National Head Coach and U21 assistant coach at the World Youth Cup held in Florida. I have totally loved seeing all the players attaining their goals at all levels of this brilliant sport and am extremely proud of how the sport has grown whilst I have been involved and how the game has moved on to embrace all ethnicities.

“How does my story relate to my love of netball and sport in general you may ask? Well, my dad was sport mad. He ran at Crystal Palace, loved athletics, football – both here and in the USA – tennis and more. I even took him to watch netball: Jamaica versus England in Wembley. He loved it, though he did give the Jamaicans a hard time! How uncanny is that? No physical influence it was all in the DNA!”

Wales Netball would like to thank Merle for sharing her story and for the contributions of all our interviewees this Black History Month. It has been wonderful to hear stories of how Black netballers have discovered their family roots and to hear incredible examples of inspiration from Black history.