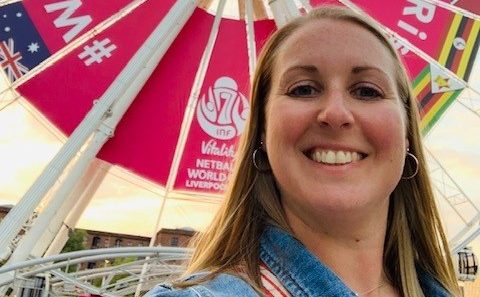 October is Breast Cancer Awareness Month and we spoke to the amazing Chloe John from Newport. Chloe is an active woman in her 30s, a PE teacher and netball enthusiast. Cancer was something that never crossed her mind. Unfortunately, she was diagnosed with breast cancer in 2020. Chloe has shared with us her journey in fighting this awful disease and some advice to all women.

After several appointments at the doctors, Chloe was told that the rash and lump she had noticed was either a sweat rash or was due to her periods or an infection. Once the lump grew to the size of a golf ball and the rash had increased to the size of her fist, she knew something wasn’t right and went back to the GP for a third time.

Finally, she was referred to the Breast Clinic where after three weeks she underwent tests. “My gut was telling me something wasn’t right and the wait for these results was one of the most anxious times I have ever experienced.”

On February 3rd 2020, Chloe was diagnosed with Stage 3, Grade 3, Triple Negative Invasive Ductal Cancer, (which is a very aggressive and fast-growing type of cancer). On hearing the news, Chloe explained “I was devastated to hear this news, I had only got married a couple of years before and we were trying for a baby, how could I have breast cancer?”

With a positive outlook, Chloe said “Now we knew what we were dealing with and that it was treatable, I was determined not to let it beat me. I was going to fight it all the way, as I would in the last quarter of a netball match!”

“You never know how strong you are until being strong is the only choice you have”.

With the weeks that followed, Chloe began her first round of chemotherapy. Then the world went into lockdown. Despite the worries, Chloe was thankfully able to continue with treatment. The chemo did its job but, it took a massive toll on Chloe’s body. To reduce the risk of the cancer returning, surgery was Chloe’s next option. She underwent a radical elective mastectomy and lymph node clearance surgery. Something which Chloe said affected her more than she realised. Both mentally and physically.

A year on from a month of radiotherapy, Chloe is making a slow and steady recovery, but she is cancer free! She has returned to teaching PE and coaching her netball teams. She said, “Only time will tell when I can take to the court again myself, but I am happy and proud of how strong I have become and realise how having a positive outlook is so important.”

Chloe is still physically recovering so has taken up coaching in the meantime. Chloe says, “I am really excited about setting up a Youth Club in my local area and it is amazing to see so many girls and teenagers at my school at training sessions.”

Sharing advice to the netball family about breast cancer, Chloe said “If you are in doubt, get checked out”

“It took three times for me going to the GP to get referred to the breast clinic, trust your instincts”

“If you start checking now, then you will know what is normal for you and then will notice when there are any changes.”

“I have been very open about my journey and have shared my experiences in the hope that I can help at least one person.”

We would like to thank Chloe for taking the time to share her story with us and the netball community. Check out Chloe and her journey on TikTok.

Support people who have or have had Breast Cancer like Chloe and many others by wearing pink today. Donate now to help make life-changing breast cancer research and care happen.