We are pleased to announce the squad of 17 that has been selected to represent Wales in the upcoming International Test Series.

Wales will face Gibraltar, Isle of Man and the Republic of Ireland in a Home Test Series which will be played at Ebbw Vale Sports Centre from the 14th to the 16th of January. In this exciting series, the 4 international sides will be competing to lift the Wendy White Trophy.

This will be the final opportunity for Wales to play in ranking Test Matches before the announcement of the remaining nations that have qualified for the Commonwealth Games in Birmingham this July.

In this home test series, Head Coach Sara Moore will be looking to expose more athletes at international level. Suzy Drane and Nia Jones will once again take the roles of captaining the Wales squad. The addition of Ella Powell-Davies in one of the Vice-Captain roles sees a new face making her debut into the leadership team. She pairs with Clare Jones who again takes the other Vice-Captain spot. 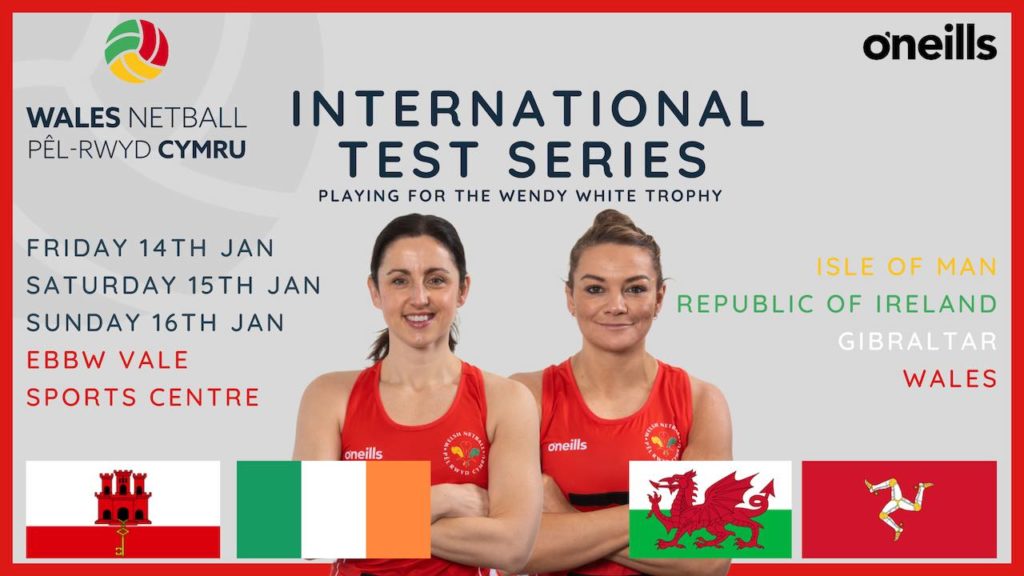 About the selected team, Sara Moore said “We are really looking forward to playing our first home series since 2019 as a Wales Senior Squad. Playing at home in Wales is what it’s all about, there simply is no greater feeling than representing your country in front of your friends and family, and our Welsh fans.”

“The current restrictions in Wales do limit us to a small crowd, but we are just grateful to be bringing international netball to Wales.”

“We have made a number of changes to the team that we took to the Isle of Man in November, and that’s a real positive. It’s vital for us to be able to expose as many athletes as possible to international netball, as we prepare for the Commonwealth Games.”

“I am really pleased with the work of our Captains and Vice-Captain heading into the series, and I’m thrilled to be able to announce Ella Powell -Davies as our Vice Captain. Ella has made a huge impact on the team since she joined us last year, leading by example both on and off the court, her contribution has been outstanding.”

The Test Series is due to start on Friday the 14th of January and will be live streamed. For all the build up to the International Test Series and for updates, follow us on Facebook, Instagram, and Twitter.

More details of the schedule and how to watch the series will be announced shortly.