January this year marked a year since the foundation of KBE Netball Club. The club, based out of the Aber Valley YMCA, Abertridwr, Caerphilly County, have achieved a lot in a very short space of time. Here, club founder Caroline Morgan tells us more about how the club came to be and how the last 12 months has been…

“Back in January 2017, I posted on Facebook to see if any of my friends wanted to join the Cardiff social netball league. We had enough to enter a team although most of the members had not played netball for 10 or more years!”

“We had to come up with a team name and we went with the light-hearted ‘Knackered But Enthusiastic’ – or KBE. Within a few weeks we had all rekindled our love of netball. We started to book courts wherever we could for weekly games/training sessions as well as playing in the league.”

“It was through the social league that we met Leah Marshall. Leah has years of experience in a range of netball roles and kindly agreed to coach us. Initially, I don’t think she thought it would be permanent, but we’ve managed to keep our claws in her! Without her help, guidance and positivity we wouldn’t be where we are today.”

“We then wanted to make the next step and officially affiliate as a Wales Netball club and enter the A470 League. Thanks to Leah, Laura Williams from Caerphilly County Borough Council and Sarah Palmer, Wales Netball’s regional Netball Development Officer we became affiliated and entered the league.”

“Now we were in the league, things became serious! We did discuss changing our club name, however after considerable discussion with our members we felt that our name represented how we started and it should stay as a legacy to our values. Ultimately, everyone is welcome no matter when you last played netball, if ever! Enthusiasm, passion and fun are what the club is all about.”

“We have applied for and secured a Community Chest grant. This has allowed us to get on coaching courses and umpiring courses in order to ensure that the club is sustainable for years to come.”

“Our first year in the A470 League went well. We trained hard in the summer and have done well in the league itself, currently sitting at about mid-table. Given that it is our first year, we are extremely pleased with this.”

“As for the future, we are steadily recruiting new members and hope to have two teams entered in the summer league ahead of another exciting season!”

Wales Netball wishes KBE all the best for its next year as a club. If anyone is interested in joining KBE, they train every Sunday 15.30-17.00 at the Aber Valley YMCA, Abertridwr. You can get in touch with Caroline on 0749652673 or via email: kbenetball@yahoo.com 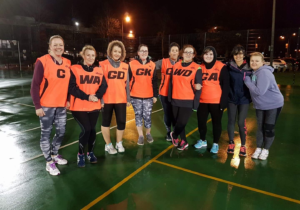