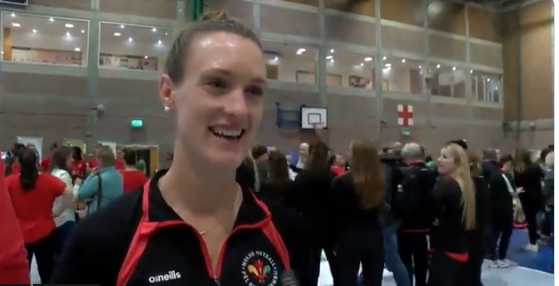 Wales had a weekend to remember in Belfast at this year’s Netball Europe competition, but for one player it was extra special. Wales centre, Kyra Jones, was named Netball Europe’s official Player of the Tournament, having played all three test matches without substitution.

Jones, 34, has been one of Wales’ best-loved netballers over the last decade. Originally from Perth, Western Australia, she came to Wales to play for the Celtic Dragons netball franchise and soon after made her debut for Wales against Northern Ireland. She reached her 50th cap during the 2018 Commonwealth Games and this weekend she surpassed 60 appearances for Cymru.

She played every second of Wales’ Netball Europe this weekend, which also followed five appearances at Wales’ busy summer tests campaign. Jones was relentless in driving the Welsh attack forward in all three matches, not least in Wales’ frantic final quarter against England. She also made numerous interceptions in defence – being instrumental to Wales’ counterattack.

“It was a fantastic competition and there were so many exceptional athletes on court over that three days from all teams involved – including Wales. It’s a credit to my teammates, the long squad and support staff for everything they’ve given leading up to Netball Europe and for the unwavering support they give me every time we hit the court – whether that’s in training or a test match.

“This award means the world to me and I’m just so proud of everything the team has achieved, both at Netball Europe and across our summer tests series.

“NETBALL…THE WELSH WAY has shone bright throughout both these campaigns and I look forward to seeing this continue.”

Wales Netball would like to congratulate Kyra on her well-deserved award after her herculean efforts at last weekend’s tournament.