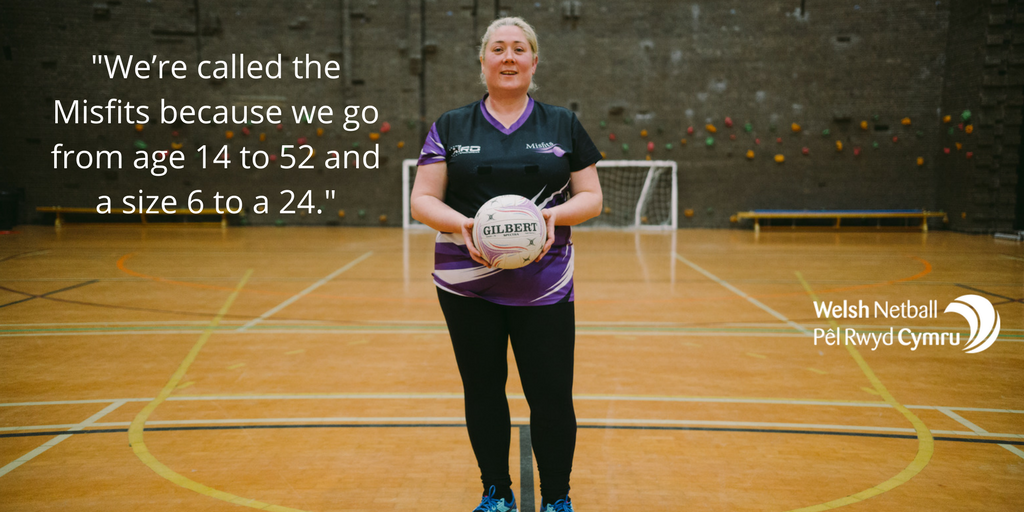 ‘We’re called the Misfits because we go from fourteen to fifty-two and … a size six to a twenty-four’.

Inclusion is the motto for Misfits netball club in Wrexham, or maybe ‘just turn up and have fun’ would work too; whatever shape, size or fitness level you are, everyone’s invited to join the Misfits family.

Set up three years ago in a little corner of Wrexham by Annette Coppell (pictured), in a hall just big enough to fit one team, the Misfits have grown
into another of grass roots netball’s success stories. Annette’s ‘family’, as she fondly calls them, have all found a common passion for the game and everything that it brings.

Many value it as a place to decompress, away from work, study and other daily stresses. ‘It’s hard to explain’, one of Annette’s original
team members says of the escape she finds in her training sessions, ‘it is just a completely different world from the outside’.

And that, it seems, is one of the biggest strengths of the Misfits and of netball, they bring people together in a place where they feel
safe and happy and where they can work up a good sweat. There a few things better than team exercise to help you forget your
everyday stresses.

But it doesn’t end there for the Misfit members. Many have found better fitness through the game, developing new skills and a healthier
lifestyle. For some it’s had an even more profound life-changing affect. Annette, after setting up the club and seeing its positive affect
on the community, has decided to go back into education and is now in her second year at university, studying Sport Science. In a
short time she will be able to realise her dream of becoming a full-time coach.

The Misfits have inspired others to set up similar clubs so that they may create a place where people can get healthy, create new relationships and have fun.