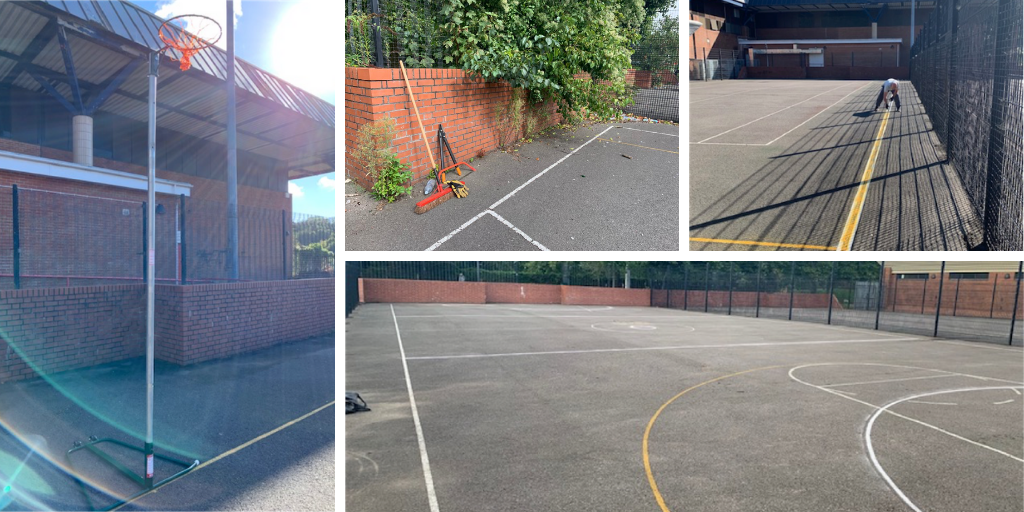 As part of Wales Netball’s ‘Return to Play’ roadmap, netball clubs across the country have been hitting the outdoor court for their training. Faced with a new way of operating as a netball club, the coaches, players and volunteers at Penarth Allstars in the Vale of Glamorgan had a proactive solution to finding a new place to train outside…

Before the pandemic, Penarth Allstars Netball Club would train in the relative comfort of St. Cyres School’s sports hall. However, Coronavirus has meant that the club have had to go in search of a new, outdoor training venue. With few options available, the club came across some outdoor sports courts in a poor state of repair. By banding together, the club was able to transform these into their new outdoor training home!

Head coach, Lisa Birchall explains: “It was a hard slog. If I never see a sweeping brush again it will be too soon!”

But clearing the courts was only the beginning of the project. The club had to source some netball posts, paint the court lines and with winter setting in, consider illuminating the court. However, Lisa and her group of loyal volunteers were up to the task!

“We were incredibly lucky to get sponsorship from Admiral for the posts,” explained Lisa. “We have managed to put in sponsorship from Belief Sports for one light and the parents have come together for a second one. Then we have also put in a grant application to the #BeActiveWales fund so we’re hoping that comes through soon. Fingers crossed.”

The club’s new outdoor set-up even includes bench seating for wary netball parents and the club will be advertising their sponsors at the new venue as well as getting a hold of kit suitable for outdoor play in the winter months.

Vicki Sutton, Wales Netball’s Community Lead praised the efforts of Lisa and her volunteers. She said: “It is wonderful to see what the coaches, players and parents at Penarth Allstars have achieved by working together. The pandemic has presented netball clubs across the country with an unprecedented set of challenges and Penarth Allstars have made the very best out of a tough situation.

“Penarth Allstars’ new outdoor court looks immaculate and I’m sure that the club’s players are going to enjoy many hours of netball on it. I would like to thank the club’s volunteers for all their hard work in transforming the facility.

The club has lots of future plans for their new outdoor court once Wales progresses further along the ‘Return to Roadmap.’ Lisa added: “We are hoping to host some junior league fixtures once the pandemic is finally over, and maybe also some summer tournaments.”

A fantastic story of teamwork and positivity in the face of change and uncertainty, Wales Netball would like to congratulate Penarth Allstars and we look forward to seeing how the club makes use of its new home in the weeks and months to come.