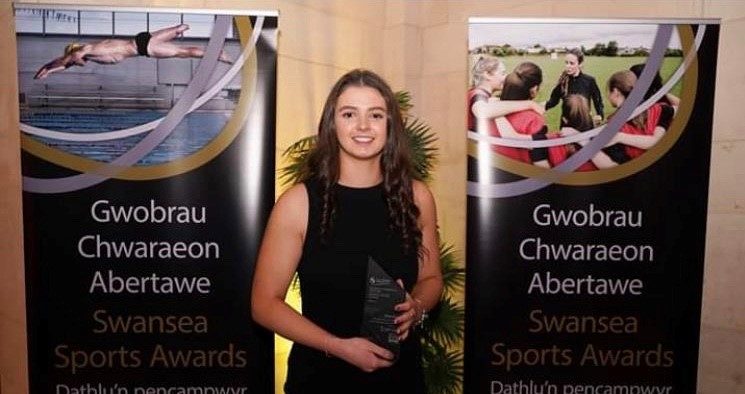 It has already been quite the year for Wales and Celtic Dragons shooter, Rhian Evans who was awarded the title of Junior Sportswoman of the Year at the Swansea Sports Awards earlier this month.

Evans, 18, has enjoyed a breakthrough year in elite netball where not only did she feature for Wales Under 21 against the Isle of Man, but she was elevated from Celtic Dragons U19 to become a member of the franchise’s elite Netball Superleague squad. Evans made her debut for Celtic Dragons in their pre-Christmas warm-up game against Manchester Thunder in Deeside and all the while she has been part of Swansea University’s successful first team.

Speaking about her achievements, Evans said: “A few weeks ago, I had the honour of winning Swansea’s junior Sportswoman of the year in the Swansea Sports Awards. This award is given as a recognition of young sporting talent in Swansea.

“I am extremely grateful and thankful for the amazing support network I have around me. This includes my family and friends, Wales, Dragons and Swansea University coaches and teammates who all provide tremendous support and have all contributed towards me winning this award.”

Netball might be on hold for now, but some great things are predicted of Rhian once she and her Welsh and franchise teammates return to court. Wales Netball would like to congratulate Rhian on her very well-deserved accolade!