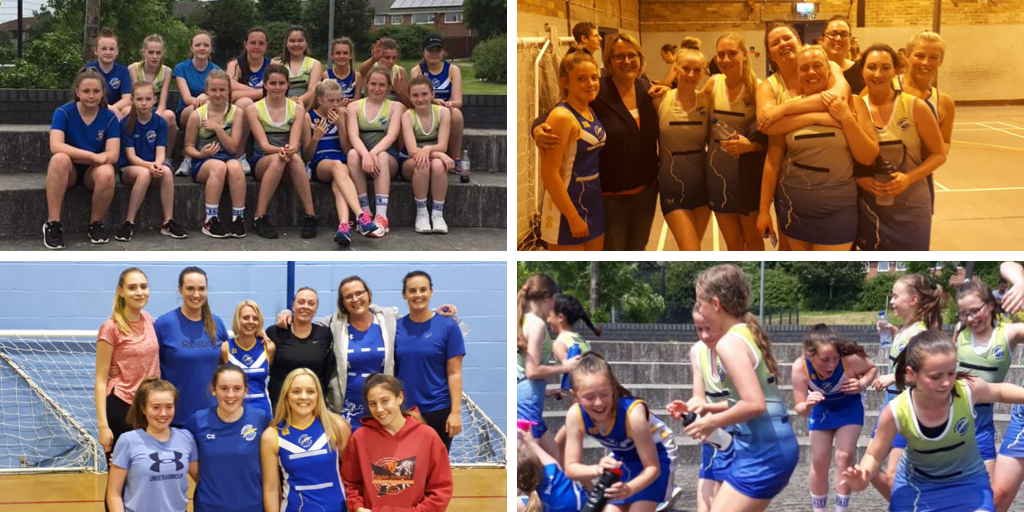 Last week, Wales Netball shared the news that it had reached over 10,000 members for the first time in its history. This achievement was made possible by the hard work of netball clubs up and down the country and we looked at the work being done at Rhosnesni Netball Club in Wrexham as part of this. Today, we are highlighting the story of Bridgend Bolts Netball Club the club with the largest levels of growth in our Central South Wales region. Here, club coach and welfare officer, Lisa Power, shares her experience of volunteering at the club.

“My journey with the Bolts began in 2016 when my daughter came home from school raving about a new sport she had tried. I researched some local clubs and came across Bridgend Bolts. My daughter was so excited to join a local team and learn more about the sport!

“We turned up to training and met the coaches who were lovely, but desperate for more help to run the club. I offered my services and had no idea then, where this journey would take me.

“I started coaching the Under 11 team. I loved the extra time I was able to spend with my daughter but also the new friendships that she was making and the life skills that netball was teaching her.

“We had a successful season qualifying through our regional round and then playing in the National club championships, an experience we all enjoyed and will never forget.”

After a successful first season with Bridgend Bolts, Lisa wanted to help the club grow even further. She knew that she would need some help with this and so recruited a friend to help her along the way…

“Our club was growing in numbers through word of mouth and I knew that passion alone was not enough to take the club to the next level. There was one person I knew I had to convince to join me and her wealth of experience and knowledge would be worth its weight in gold.

“I contacted my good friend Gail Calford and I managed to convince her to join me (temporarily if I remember correctly was how I worded it!) at the club.

“I knew together we could offer these girls something worth investing their time, money and hard work in and it has certainly paid off. Gail’s experience of netball and knowledge of running a club helped us to put in place a strategy for the Bolts, which has seen our netball club go from strength to strength.

“The clubs ethos is based on trust, honesty and respect, this is a two way process between us and our members. This club is not just an extra curricular activity, it is a family that share in the highs and lows life brings on and off the court.”

Lisa has also been heartened to see the growth of other netball teams in the area, resulting in the development of the Bridgend Junior League.

“It has been really encouraging to see other local teams setting up and this demonstrates the growth and demand for this sport in our region. We would like to thank Laura Rees [Central South Wales Netball Development Officer] for supporting our drive to push for a local junior league in Bridgend. Being part of this new league has inspired us to keep developing our workforce and next generation of future netballers.”

This push for growth was not limited to the young players of Bridgend Bolts. Lisa and Gail also sought to develop a senior side, such is the demand for netball in the area.

“Gail and I knew that together we could work to develop the senior section of the Bolts club. There were many requests from parents, friends and members of the local community so we knew the numbers were certainly healthy to give it a shot.

“We wanted to cater for all who joined our club and Gail stepped up to the challenge of coaching a mixture of beginners, intermediate and advanced players… it was quite some task but she nailed it!

“Our numbers continued to grow steadily and we now have three competitive teams who participate in the Bridgend Senior Netball League. We have enjoyed playing in many other local leagues including Central South and Swansea.”

Reflecting on the last four years at Bridgend Bolts, Lisa spoke of the achievements of her players and how they have grown both on and off the court…

“The club has enjoyed a number of successes in such a small time and developed some wonderful players who have made selection for the Glamorgan Valleys and Wales Netball Talent Centre teams. However, it has been just as rewarding to watch those girls who joined with little confidence and low self-esteem blossom in to young ladies with self-belief and courage to challenge themselves to be better versions of themselves.

“Our ambition is to become a club that allows girls to fulfil their full netball potential. Gail and I are passionate about ensuring netball is accessible for all and enjoying this at a local level is key to ensuring generation upon generation are inspired to take part.”

Wales Netball would like to thank Lisa and Gail as well as the other volunteers at Bridgend Bolts and at clubs across the Central South Wales region for all of their hard work. Next week we will focus on Mid Wales where yet another netballing success story has emerged as netball continues its unstoppable rise.