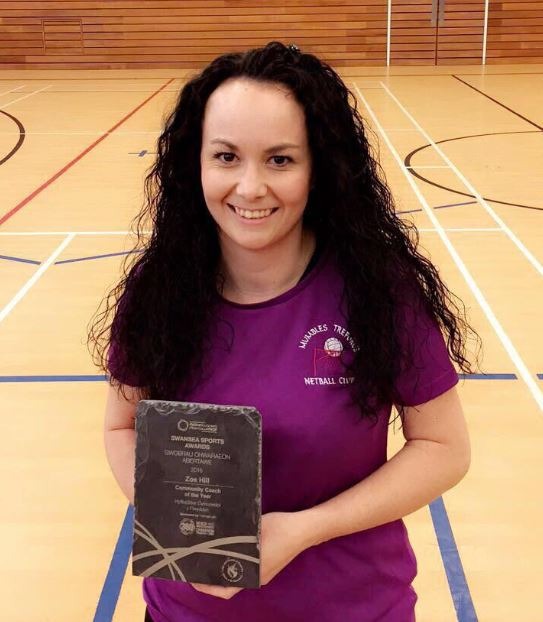 33 year-old Primary School teacher Zoe Hill recently won Community Coach of the Year Award at the Swansea Sports Awards. We caught up with Zoe to find out why she volunteers, and what are her responsibilities.

Hi Zoe, could you describe your role as one of Wales Netball’s Performance Training Centre Coach, and your Coaching roles elsewhere?

I have been PTC coach for the past 2 years, but I’ve been involved in the Local Authority Hub for 5 years.  I also coach Mumbles Treforus Netball Club, for ages 8+ with around 150 girls which involves 6 hours of coaching on the weekend and 7 teams are involved in the Swansea adult league throughout the week.  I also coach the U14 Afan Nedd Tawe county team.

What are a Coach’s responsibilities?

– Encourage girls to be the best they can be

– Be a role model

Why did you start coaching?

I’d finished my degree and I was asked if I wanted to help out with some coaching for Mumbles Treforus, so I went along to a few sessions.  I was then given the younger age groups to coach at first, but then I eventually took over the club.  I’m proud to say that Wales U21 player and Wales senior long squad member Chloe James was part of the first team that I ever coached.

Why do you think volunteers (and volunteer coaches in particular) are so important in growing the game here in Wales?

Netball has grown so much in popularity and is becoming more high profile, especially now with games being televised, so it is important that there are enough volunteers and coaches for girls to be given the opportunities to play.  When I first started coaching, we were one of the few clubs that had U11 sections in our area.  Now there are more clubs, more volunteers and more girls playing netball.  There is a huge demand for girls to play netball, which is great to see.

What advice would you give someone who’s thinking of coaching voluntarily?

Have fun with it! It’s a hobby and it should be fun for you and them!