Grit and Belief Secures a Dramatic Draw with England 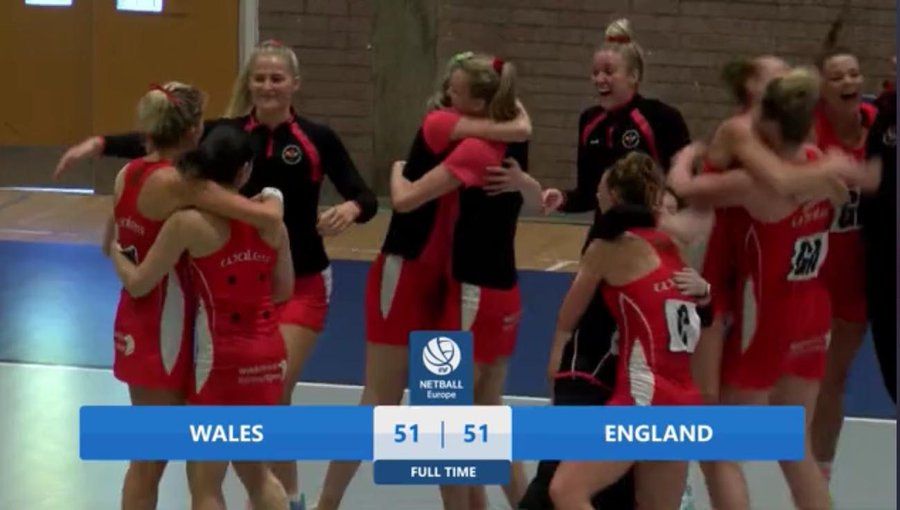 Wales fought for every moment of their encounter with serial Netball Europe winners England to record a stunning 51-all draw in the dying moments of the game, having trailed by as many as 11 goals earlier in the match.

Wales looked solid and composed as the game got underway on Day 2 of Netball Europe. Despite a heads-up start, some unforced Welsh errors helped England into an early lead in the match. Wales’ defence nevertheless moved with purpose, forcing an English held ball and preventing the Roses’ attack from taking full advantage of their possession. England were up by 7 at the break and the team knew that there was work to be done.

England had their lead, but Wales came out for the second quarter unfazed. Georgia Rowe demonstrated excellent reflexes and held the ball well as Suzy Drane rattled in the feeds. Efforts in defence continued to put pressure on the Roses with both Nia Jones and Leila Thomas getting in tips in quick succession. Wales were able to slow the pace of England’s attacking plays and the team finished the half with a patient drive to keep the Roses well within reach.

The second half started as the first had finished, with Wales playing with focus and determination in defence as England’s centre pass took an agonisingly long time to reach their target. Kyra Jones stalked the Roses attack until spotting the perfect opportunity to pounce and steal the ball. The moment of the match until that point was an incredible dive onto the ball from Nia Jones who was able to get it away to Clare Jones and up court for the goal.

Still, there was drama yet to come as Wales looked to overhaul the opposition in the final quarter. Wales continued to play with composure and patience, despite the ticking hands of the clock. Sound levels in the arena grew with every passing moment as Chelsea Lewis scored a number of long-range efforts to diminish the Roses’ advantage. Before you knew it, Wales were within 4 goals with a mere 120 seconds left on the clock. English nerves started to set in and a disciplined Wales took their chance. England looked to stall for time but Kyra Jones was wise to the tactic, again setting up Chelsea Lewis for another distance shot. Fans watching at home were euphoric as Wales drew level and it seemed that time was up. However, some confusion amongst the officials meant that England had one final opportunity to score and nick the win. An infringement in the circle gave the opposition a gold-plated chance to win, but Leila Thomas gave it one final leap to sufficiently distract the English shooter and keep it a tied game.

Reacting to the dramatic game in Belfast, Rachel Bayley, Wales Netball’s Head of Performance said: “Today’s match has been absolutely edge-of-the-seat stuff and an incredible advert for both netball and elite women’s sport. The team showed incredible belief and emptied the tank in that final quarter with full belief that they could get a result – we are rightly very proud of them.

“This result is a reward for all of the hard work these players and the management team – who are largely voluntary – have been putting in for months. They have created real momentum from their excellent results at the summer tests, breaking back into the world’s top 10, and yesterday beating higher ranked opposition in Northern Ireland.

“With the 2022 Commonwealth Games on the horizon and the 2023 World Cup in South Africa beyond that, the sky’s the limit for this fantastic group of athletes.”

Wales now have an opportunity to seal gold at Netball Europe for the first time since 2014. They face one final crunch clash against the Republic of Ireland which will take place at 10am tomorrow (Sunday 29 September) and will be live on Wales Netball’s Facebook page.