Wales Netball is pleased and proud to hear that goal keeper Kelly Morgan, vice-captain of Wales at the recent Commonwealth Games and current Celtic Dragons vice-captain, has been nominated for a Chwarae Teg ‘Womenspire’ award.

Kelly, who works as a research fellow at Cardiff University has been nominated for one of the prestigious awards, run by the charity Chwarae Teg. Chwarae Teg, which is Welsh for ‘fair play,’ has been campaigning since 1992 for ‘a Wales where women achieve and prosper’. Chwarae Teg have a range of missions in their work, from helping women develop confidence and skills, to working with policymakers to help build a society that supports and benefits both women and men.

Chwarae Teg’s ‘Womenspire’ awards recognise outstanding individuals who have contributed to inspiring women in Welsh public life. In this case, Kelly has been nominated for the ‘Sport’ category. She has been chosen from 400 other nominees to be one of the four finalists for the award.

Chwarae Teg’s recognises the important role that inspirational sportswomen play in Welsh society. They say: “The profile of women’s sport is becoming more and more prevalent but still has a way to go to have the same profile as men’s sport. This award recognises the contribution women make to sport in Wales. This could be as an athlete, coach or in another role in which they have raised the visibility or increased the impact of women’s sport in Wales. The winner of this award will be a woman who is a game changer; a true inspiration for other women to participate and achieve in sport or who has supported others to achieve in their sports careers.”

Wales Netball congratulates Kelly on her nomination and wishes her all the best for the awards. More information about ‘Womenspire’ and the awards evening can be found here. 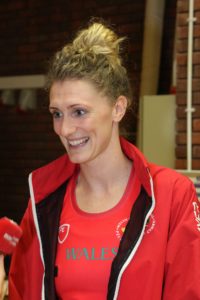