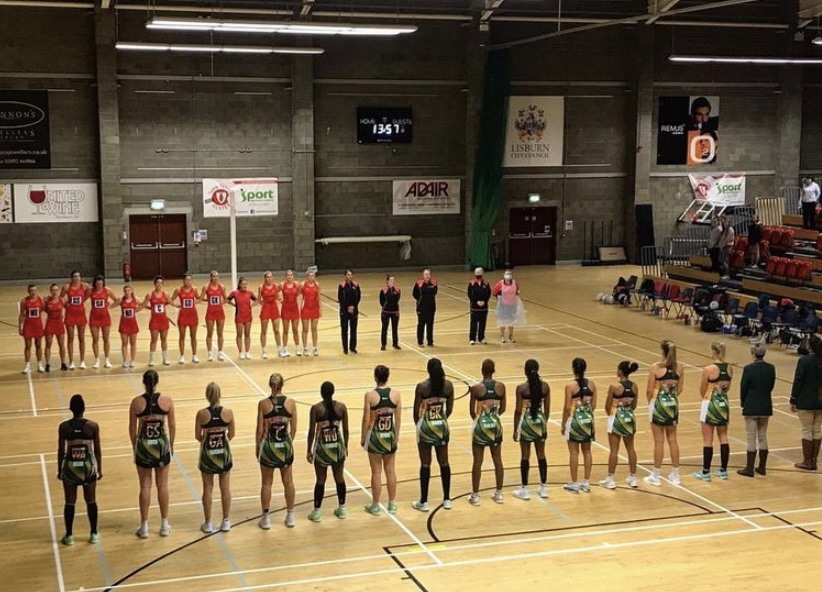 On Sunday 24th October, the senior squad travelled to Belfast to play a training game against the SPAR Proteas side. The South African team came to the UK ranked 5th in the world, after an impressive few years climbing the world rankings (pre-covid 19).

Under the guidance of Head Coach Sara Moore (nee Hale) and her experienced management team, the squad set off from Bristol Airport eager to show that the intense training they have been doing is paying off in the run up to Birmingham 2022 qualification.

Wales Captain Nia Jones gave us her account of the trip.

“It was an invaluable experience for our group to be able to test ourselves against a team as formidable as the South African SPAR Proteas. After some positive results in the Summer for us, this was a level up in our preparation towards Birmingham 2022. It was extremely tight in the first half, if anything we were disappointed not to be up given the amount of ball we were able to turn over as a team. It has given us a huge chunk of belief going forward in what we can do against the top nation. Our task now is to keep improving, to be able to sustain that level of performance for longer in future matches.”

We also spoke to Head Coach Sara Moore to get her thoughts.

“It was great to have the opportunity to play the South African Spar Proteas on Sunday, and I’m pretty pleased with how we went as a group. The first half in particular was really pleasing, as it was a really tight contest between both teams. Despite an early start for Wales with travel, we were able to compete with South Africa and put out some really great netball. We exposed 10 out of 12 players, and we learnt lots about ourselves as a group. It is definitely another step in the right direction for us on our journey to qualify for Commonwealth Games and World Cup, and as a team we will continue to ask more of ourselves and push forwards.”

The next stage of the Wales Senior team preparation sees the squad travel to the Isle Of Man in the forthcoming weeks to play a series of test matches. We look forward to announcing the squad for that trip very soon.