On Monday 12 February, Wales Netball was pleased to mark a wonderful achievement by one of its elite international netballers. Kyra Jones, 32, played her fiftieth match for Wales back in January against Northern Ireland at the Netball Europe World Cup Qualifiers. After Monday’s Celtic Dragons VNSL match, she was presented with a commemorative lovespoon by Nicola Phillips, Team Wales’ Chef de Mission for the upcoming Commonwealth Games.

Jones, the 192nd player to have represented Wales in international netball, made her debut for Wales in May 2012 against Scotland. Since, she has represented Wales with distinction in competitions ranging from Netball Europe Championships, to World Cups and Commonwealth Games. Her career with Wales has taken her to locations as far flung as South Africa and the Cook Islands.

Jones was pleased and proud to have reached such a notable milestone. She said: “It’s really exciting, I didn’t think I’d get there! It’s quite the honour to be able to put the red dress for 50 caps. Fingers crossed, I will be able to get a few more.”

Rosie Pretorius, Wales Netball’s Head of Performance, who has played alongside Jones, was full of praise for the Wales centre. She said: “Kyra first came over to Wales in 2009 to play for Celtic Dragons. She received her first cap in 2012 and ever since, she has been an integral part of the Welsh squad. Wales Netball and all her fans would like to congratulate her on this special occasion!” 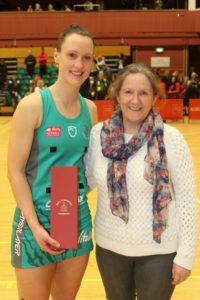