Walking Netball On the Rise in Rhondda Cynon Taff

Across Wales, walking netball has been rapidly growing in popularity and recent months have seen hundreds of women falling back in love with the game. In one South Wales Valleys community, walking netball has struck a chord and a new club has gone from strength-to-strength.

Following a meeting of Wales Netball, Sport RCT and the local Women’s Institute federation, some walking netball pilot sessions were hosted in Rhondda Cynon Taff. One of the participants on these sessions was Sian Ponting. Despite no previous experience of running a sports club, Sian was encouraged and supported to take walking netball in the local area to the next level and take charge of the running of the club.

Initially, Llantwit Faerdre Walking Netball Club was set-up for members of the WI in the county. The club gradually grew to have 11 members before the decision was taken to open membership to the whole community which was when the club really started to take off! Since its establishment in the summer, the club has grown to have over 28 regular members in November and is essentially at capacity.

Speaking about the journey from taster sessions to becoming a National Governing Body affiliated netball club, Sian spoke about the themes at the heart of walking netball.

She said: “I had been attending sessions since day one and have loved taking part in warm ups, skills drills and playing matches. I was then asked if I would be interested in taking over as the netball host. Initially I was a little unsure as I didn’t have any experience of setting up a sports club but with the assurance of plenty of support I agreed to take on the role.

“The decision was made to then open up the sessions to the wider community. This was so we could support two of the WI’s current resolutions that we were supporting: ‘alleviating loneliness’ and ‘mental health matters.’

“There are many ladies that feel that sport isn’t for them. Not because they aren’t interested, but because they feel that they might not be fit enough, young enough, have enough knowledge – but walking netball is extremely inclusive. You only have to look at the cross-section of ages we are delivering to each week to see that age is just a number.

“Exercise can be a fun and sociable experience with benefits for mental as well as physical health. Belonging to a club is a brilliant way to share fun and laughter and make you feel better about yourself.”

With so many new members, walking netball was quickly having a tangible impact on the well-being of its members. One of these members is Andrea Davies.

Andrea, 52, lives in Church Village and works in a high street bank. She has loved getting back involved with netball and spoke about her time with the club.

She said: “Getting myself a bit fitter was my main aim because I didn’t do much exercise and it was also a way to have some fun and meet other people.

“We’ve gone from 5 of us to nearly 30 so we’ve grown in numbers tremendously and its a lot more fun when there’s more people. We get on really well all of us – we’re going out for a Christmas meal all together next week!”

When asked what she would say to someone debating whether to get involved with walking netball, she said: “Definitely come along – it’s a great way to meet people and it’s open to all ages and abilities.”

Laura Rees, Netball Development Officer for Central South Wales worked closely with Sian and other stakeholders to support the club and was pleased to see how well the group had progressed.

She said: “Sian and the ladies at have done a wonderful job of growing the club and it is great to see them getting so much enjoyment out of netball. Walking netball brings some fantastic health and well-being benefits and I’m pleased that we have been able to support Llantwit Faerdre Walking Netball Club on their journey so far.”

Wales Netball would like to congratulate Llantwit Faerdre Walking Netball  on a fantastic six months and wish the ladies all the best for 2019! 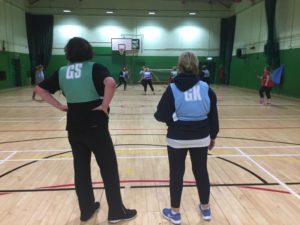