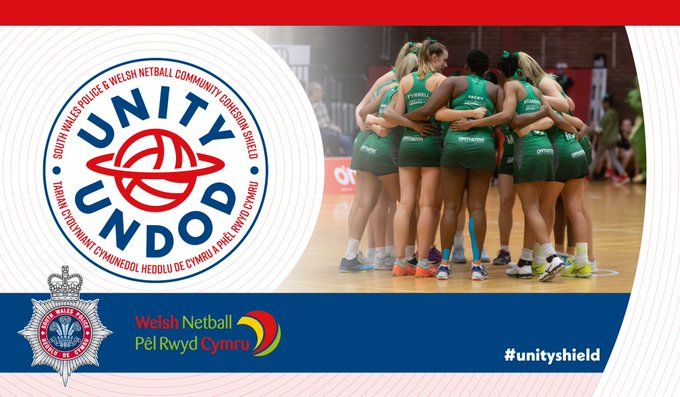 (30 Oct 2019) Wales Netball has extended the entry deadline for the Unity Shield competition taking place on 23 November in Swansea. Entries can now be made up to 5pm on Sunday 3 November. Please download the entry form below and return to tori.roberts-burt@walesnetball.com

Wales Netball is pleased to be working alongside South Wales Police on a new initiative to encourage women and girls from under-represented communities to get involved with netball.

The Unity Shield will be played for the first time this November and has been developed in partnership with South Wales Police whose officers have already been hard at work recruiting participants from communities across South Wales.

The Unity Shield will be contested on Saturday 23 November in Swansea. Teams will come from a diverse range of communities and encourages participation by those from black, Asian and minority ethnic (BAME) backgrounds.

Ben Williams, Wales Netball’s Head of Community Development said: “We are very excited to enter into partnership with South Wales Police in launching the Unity Shield.

“South Wales Police have an excellent track record in driving participation in community sport and by working together on the Unity Shield we hope to ally our netball expertise with the police’s ability to engage with all parts of our community.

“This fun, inclusive tournament illustrates yet again Wales Netball’s commitment to partnership working and will deliver some fantastic health and well-being benefits to the participants involved.”

Superintendent Cath Larkman said: “There are a lot of good community cohesion sporting events taking place throughout the force but it was felt there could be more offered to women and girls.

“Netball can be extremely competitive, is the most popular female participant sport in the UK and is has significantly grown in national profile with the success of national teams.

“The aim of the Unity Shield is to encourage and support participation in netball by women and girls generally, but particularly those from a BAME background.

“Sport is a great way to encourage well-being, social confidence and inclusion.  Sport can also be a powerful tool to break down any barriers between communities themselves and also with the police.  As well as those positives, it’s also great fun!

Each of the teams will need to have 50% BAME representation and a member of the police will also be allocated.

Anyone interested in taking part or who knows a team who may be interested should get in touch with their local officer. You can also keep up to date with South Wales Police via Twitter (@swpolice) and Facebook (facebook.com/swpolice).