On Sunday 15 July, Wales Netball was pleased to be at Cardiff Race for Life, promoting netball in the Central South region and supporting all the race’s participants. Race for Life is a women only race event, taking in various distances, which raises vital funds for Cancer Research UK.

Wales Netball brought its fun inflatable netball court to Cardiff’s Coopers Field, which proved very popular, and distributed information about local clubs to the thousands of people in attendance. It was a great opportunity to showcase netball in the beautiful July sun and there was a big level of interest in netball participation from those at the event.

Laura Rees, Netball Development Officer for the Central South region was very pleased by the reaction from the public at Race for Life.

She said: “It was a great honour be at Race for Life and it was wonderful to see so many inspirational women taking part in the races. We were very pleased to bring the inflatable to the event and showcase Wales Netball and local clubs. Just like Race for Life, netball empowers women and girls and hopefully we have encouraged some of the participants to give netball a go at their local club!”

Wales Netball would like to congratulate all of those who participated in Race for Life and thank the organisers for hosting us on the day. 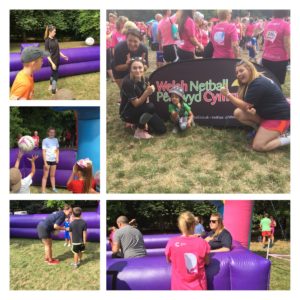